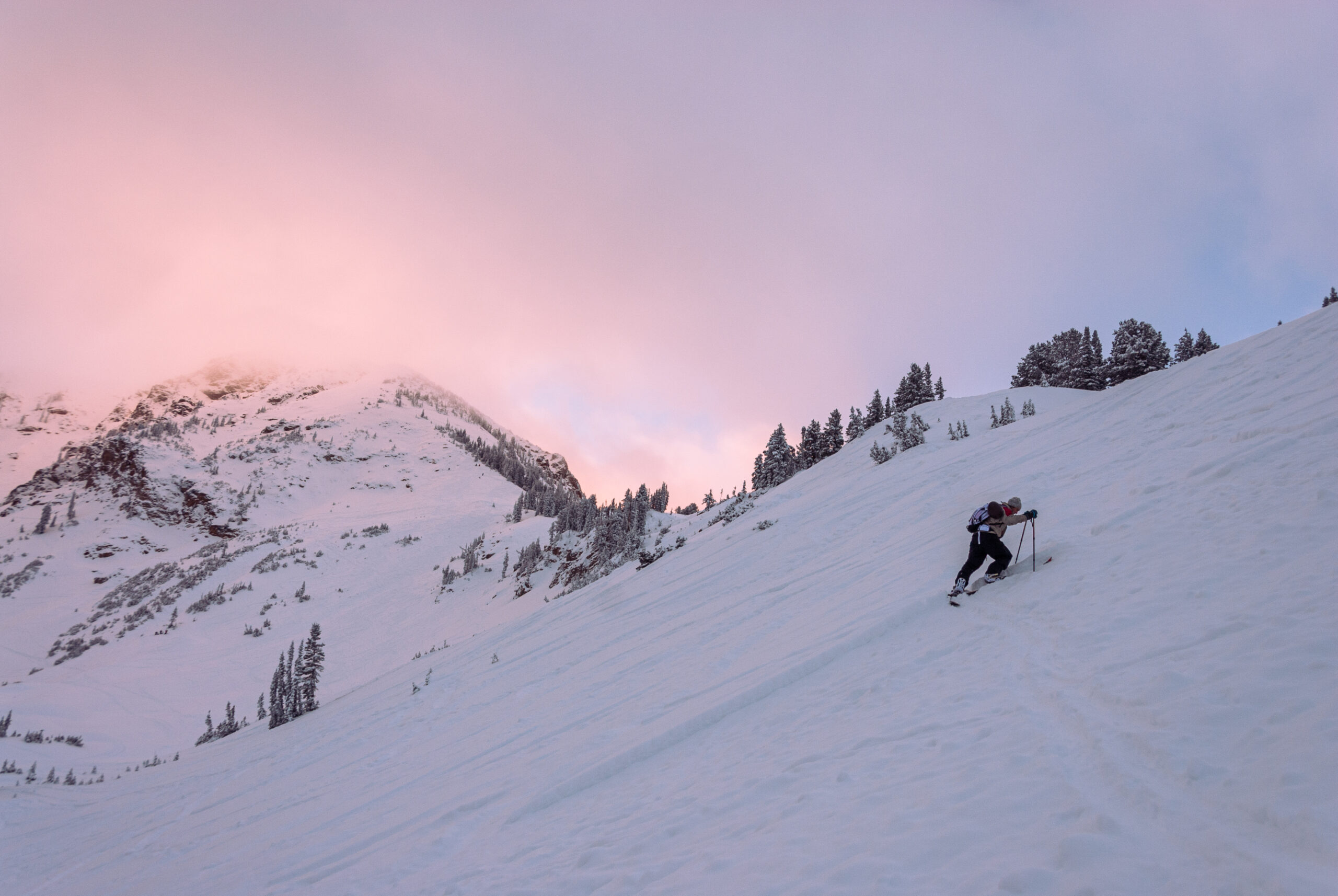 An ode to wondrous conditions following a day on wintry slopes around the world.

A bluebird day begins in the pre-dawn hours, under the tailings of a blizzard.

A fire, breakfast burritos, and hot tea coax the body vertical. On the drive to a cherished ski hill, resort, or backcountry trail, the skirt of the storm begins to lift, revealing a fresh layer of snow that rests on the landscape like a blank word-processing document.

The whiteness persuades even the most hesitant of writers to journal and punctuate the page with anything from early morning ennui to nonsense exclamations like yippee! and yahoo! before signing it with the sweeping signatures of ski turns.

The storm dissipates while riding first chair or skinning up steep slopes. The sky lightens from a darkly nautical blue bedazzled with a handful of early morning stars to a rich robin’s egg hue.

Soon, the winter sun summits a far ridgeline of mountains and slingshots its rays across the facets of the top layer of snow, turning the entire mountain range into a disco ball.

From the top of the lift, faraway valleys give way to horizons framed by other ranges.

Descents through glades and bowls on Rocky Mountain “champagne” powder give the feeling of flight—a little bluebird of happiness.

Merriam Webster dates the first known use of the phrase “bluebird day” to 1860 and defines it as “a day marked by cloudless blue skies.”

Other definitions specify that the phenomenon typically happens after a night of snowfall.

The phrase has been used for decades by skiers, snowboarders, hunters, anglers, and others to connote the happiness the sun ignites on a winter day, most commonly in the American West. (It can also be heard across North America and around the world, uttered by snow sports enthusiasts who encountered it in North America.)

Others believe the phrase comes from the feeling of joy that the bluebird—three thrushes from the genus Sialia including western bluebirds, mountain bluebirds, and eastern bluebirds—bring when they ignite our meadows with tiny fireworks of sky-blue feathers.

Numerous cultures across Europe and Asia have deemed the bluebird a bringer of joy and hope. In the Southwest, the Diné (Navajo) say the bluebird is “the image of a god, the herald of the rising sun.”

The Cochiti say that the Sun once impregnated a woman, and that they named their firstborn Culutiwa, or Bluebird.

In Colorado, my mother keeps a journal of the first mountain bluebirds she sees as they return in spring amongst seas of sage and rabbitbrush. She tells me she looks forward all winter to their cheery homecoming. Wrote poet Joy Harjo, “Birds are singing the sky into place.”

Backcountry skier Beth Lopez of Salt Lake City, Utah, has chased hundreds of bluebird days across the Rocky Mountains in her quest for the perfect line.

“The sun is my saving grace and my holy grail,” she says, describing the frostbite damage she’s acquired from various ski touring trips. “I wait for it to come out, it’s my heater that saves me.”

A writer and ski ambassador for brands like Arc’teryx, Lopez is working on skiing all 90 lines in The Chuting Gallery: A Guide to Steep Skiing in the Wasatch by Andrew McLean, which have been completed by only one woman—professional skier and climate activist Caroline Gleich.

The guide has become a lifelong checklist for many Salt Lake City-area backcountry skiers. Some consider it a Holy Grail of experiences in Utah’s towering Wasatch Range, running 160 miles long and cresting at 11,928 feet.

Within the guide are chutes named Heart of Darkness, Hellgate Couloir, and The Hypodermic Needle. Lopez notes she doesn’t typically share this goal publicly, but hopes that in doing so she’ll inspire other female athletes to take on the endeavor.

“It’s funny how you can get flummoxed,” she says, “the average line [in The Chuting Gallery] can take several attempts to complete because the conditions may not add up, your gear breaks, or the weather turns.”

In the backcountry, predicting safe, skiable conditions is a science with hidden variables.

Lopez uses avalanche forecasts, mapping, sun positioning, and other snow tests to lessen the risk of avalanches and fatal falls during backcountry ski tours—but even these careful observations can fail skiers and put them in danger, like the unpredictable pocket of gelatinous snow that once caused Lopez to tear every ligament in her knee and bruise her femur.

The sun is a fickle mistress. She can either give you perfect soft snow or send you into survival mode.

“The sun is a fickle mistress,” Lopez says. “She can either give you perfect soft snow or send you into survival mode.”

Conditions on the resort are far more predictable. From powder to corduroy, from crud to ice, on-piste skiers—whether skiing the Wasatch, The French Alps, or New Zealand’s Remarkables—are given a consistent menu of snow that we learn to read with experience. While powder is one of the most sought-after conditions.

In spring, another anticipated one arrives: corn snow.

“For an ephemeral hour, there is that beautiful window of corn,” Lopez says, describing the Goldilocks condition of forgiving snow that hasn’t yet turned into a slush from the intensity of a spring sun. Upclose, the snow resembles albino kernels of frozen maize.

Like bluebird days, corn snow is prized in ski communities around the globe. Each winter, we form new bonds with the sun as it heats and energizes us with its brief, slanted rays.

Short days remind us of its value, as does the sun-worshiping cat in the odd corner of the office soaking up its last beams. We forget the fatigue the sun’s fever has caused us over the ever-lengthening summers wrought with wildfires and heatwaves.

Perhaps we call these clear, cloudless days “bluebird” because these winter days are almost summer-like, a harbinger of what is to come.

Or perhaps they are just wake-up calls, reminding us we are skiing in technicolor fantasy of deep powder and hundred-mile views.